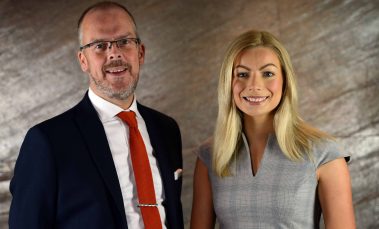 A TOP law firm has joined the country’s elite – by appointing a rising star as its first solicitor apprentice.

The coveted traineeships are usually the reserve of big city firms, but Cartmell Shepherd has stepped up and made history in Cumbria.  The move to offer the county’s first solicitor apprenticeship was made by managing director, Peter Stafford, who told aspiring solicitor Holly Moxon “You’re hired.”

Holly, 20, from Carlisle today spoke of her delight, as she started the six-year process of becoming a fully qualified solicitor.  She said: “I had wanted to pursue a career in law since sixth form and I tried the university route in Liverpool, but I quickly realised it wasn’t for me. I didn’t like the lifestyle, I had just 10 hours of study a week and I didn’t feel that was very good value for the significant investment in university fees.

“I was also very conscious of the debt I would have after four years without having any guarantee of a training contract, so after three weeks, I decided to leave the course and return home to Carlisle. When I left everyone was really shocked and asked what my plan was. I felt a little lost, so I started to research alternative routes into law.”

It was through her research that Holly, a former pupil of Nelson Tomlinson School and Trinity Sixth Form, discovered solicitor apprenticeships, although they were generally only being offered by larger, city-based law firms.

After seeking advice from careers service Inspira about the best way forward, she set about applying to local law firms in the hope there may be a route into the career she had set her heart on.

She was offered an interview with Cartmell Shepherd and taken on initially as a business administration apprentice. As part of its internal reviews, the possibility of a solicitor apprenticeship was raised, and Holly is now operating in this new role.

One aim of Cartmell Shepherd’s business strategy is to invest in and provide training of the highest quality for all its staff.  Identifying and recruiting local people with talent and real potential, whilst providing an alternative route to qualification from the traditional graduate route, sits firmly within this strategy.

Peter Stafford is the managing director of Cartmell Shepherd and believes it is important that university is not seen as the only route into a career in law.

He said: “In the past, our process has been to recruit law students either in the final year of university or while doing their Legal Practice Course. We would invite – and get a lot of – applications, and through a process of shortlisting and interview, we would eventually employ a trainee solicitor.

“The situation with Holly was that she had been known to us for over a year and rather than sending her off to university, for her to return four years later, we pursued an alternative route.

“The beauty of an apprenticeship is that Holly stays with us for six years and will get great on-the-job experience across all of our departments. That’s valuable because learning the theory of being a lawyer is very different to the practice, which she will be exposed to during her training with us.”

Although recruiting and training a solicitor apprentice represents a six-year commitment to the business, Cartmell Shepherd have recognised the real benefits to both Holly and the business around this alternative route to qualification.

For Holly, that engenders a heightened sense of loyalty to the business: “I’m so determined to do my absolute best for the company,” she said.

“They have given me this incredible opportunity and I want to repay that with commitment and loyalty. I see many of the directors and solicitors as an inspiration as they started with the business as trainees and have been promoted through the company. I hope I have a long career with Cartmells.”